As of today, I’ve lived longer than my father.

I counted carefully—start with the birthday, proceed 14 weeks, subtract a day. I wanted to wake up this morning, the day in question, and know for sure that once I got through mid-afternoon, I would have lived longer than my father. An achievement I didn’t ask for, but worked for nonetheless. I don’t know that I’ve ever felt so young.

I drove neutral, since my four-year-old son was in the car. Actually, to say I drove precise and alert would be selling it short. I aimed to keep my son safe from fluke timing, as if I could do such a superheroic thing. Once I got home, unbuckled him from his car seat’s five-point harness, and settled him at his train table so I could write this, I thought, he’s the one who kept me safe. My father didn’t have us, his daughters, in the car. We were 10, 8, 7, and 6 at the time and we were not in the car. We were waiting for him at home, a wait that seems like it didn’t really end until today.

(Sisters, the wait is over. Daddy’s not coming home. We’ve all lived longer than our father.)

Now, I look at my son (he’s right here, I wish you could see him, he’s so beautiful), and think, small / achingly sweet / needs me. For how long will he need me? Projecting his educational span, when he turns 23 in 18+ years, he’ll be a grownup, done with the biggest me-part. Two years beyond that, his twin brothers will reach the same milestone.

I know they’ll always need me. I still need my father. But they’ll need me differently. So from tomorrow, the first step of a life longer than my father’s life, I’ll be counting carefully. To 18, then to 20. Along the way, we’ll cross bridges. My sons will move into this phase and that, while I get older and a little easier on death.

My son is whispering to a truck that’s waiting at a train crossing, while he pushes the locomotive, carrying some five freight cars, through the intersection. I’m can’t hear what he’s saying, but I’m sure it’s something like, wait here, don’t cross yet, it’s not safe. 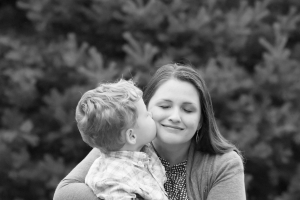