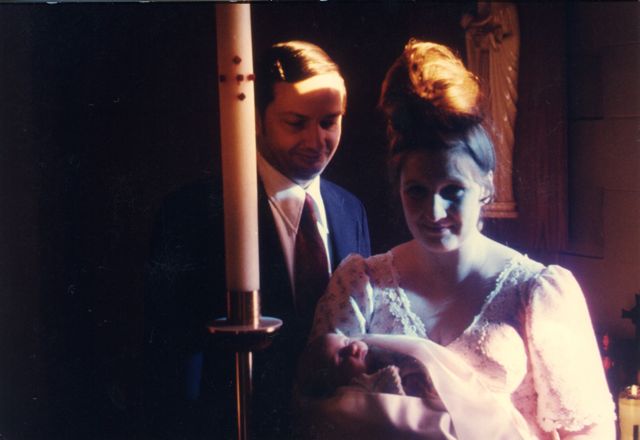 On January 4, two days after meeting my twin infant sons for the first time, while my family was celebrating the holidays as we always do after the new year, my mother was diagnosed with Stage 4 Renal Cancer. She died nine weeks later.

My last lucid conversation with my mother was Tuesday, January 27. My husband was in Chicago and a blizzard was in NY. I called Mom at the nursing home to tell her that I’d actually gone out in the snow with my toddler and my twin infants. I told her my toddler happily helped me push the double stroller through the mush on the sidewalk, but he didn’t like snow on his cheeks. She said, “Every time you talk about your children, I hear so much love in your voice. I’m proud of you.”

My sons will never know their grandmother’s garden and sewing, her limitless ideas and supplies for crafts, her razor wit, her delight in sitting and “chatting” with a baby for hours. But they know me. I’m a product of my mother, my children are a product of me. Photos and stories may interest them some day. For now, to know her, they just need me.

Yet … I still want my community to know her.

On March 16, my sisters and I delivered Mom’s eulogy. One cherished friend was able to come, driving very far to be with me, but I had to ask her to help babysit my kids in the hall during the funeral. Over two months later, I’m still unsettled, like the eulogy wasn’t given, it was withheld, and it’s still stuck in my throat. So I’m sharing it here. One small closure in a series of ends.

Eulogy for Mom, in four parts:

Dolores was an extraordinary homemaker, mother, and grandmother. Less known was Dolores, the trailblazer. Childhood stories referred to stubbornness and bossiness, but through a gender-neutral lens, that’s tenacity and leadership. It takes courage to follow one’s passion even when it’s ‘not the thing to do,’ and she always felt strongly enough about her decisions to go against the norm.

After graduating salutatorian from high school, Dolores majored in math at college, a bold choice for a woman at that time. To pay for school, she worked full-time at a supermarket—in stilettos! She shared a room, so she literally studied in the bathtub. She became a teacher in the military, an environment not easy for women. When she learned the Army was hiring talented mathematicians for a project in Germany, she left on the next plane.

She was spirited. She tore down military-issued window coverings and hung handmade bright floral curtains. She was a catch, and selective. Not many know that before meeting Ed, Dolores dumped her libertine fiancé. She had high standards.

Ed captured her heart with intellect that matched hers. He must’ve felt lucky to meet such a vivacious, lively, warm, beautiful woman—characteristics that continued even after enormous loss. To lose a child and husband so young, with four girls—it would be understandable to crumble. One could go through half what Mom did and lose spirit. But Mom became more focused on life, attuned to friends and strangers in need, and responsive to her home and daughters. She had enormous courage.

The majority of Mom’s trailblazing successes have gone unnoticed: no awards, no public prestige. And yet my sisters and I are able to do, and be, and choose, and say, because of this incredible woman. Thank you, Mom, for being our role model, forging ahead of us, leaving a path to follow, and a map for making our own way. We will miss you always.

That map for making our own way was first drawn by a young teacher eager to see the world. Mom’s teaching job in Germany served as a launch point for travels across Europe and the Middle East. She made friends, bought mementos, and got into a little light-hearted trouble. She told us she’d just take the next train and see where it went.

This love of travel did not diminish when she became a homemaker and mother. She filled her daughters’ childhood with countless trips both near, like antiquing in New Hampshire, and far, like our grand adventure in Alaska that included a very memorable helicopter flight to the top of a glacier. Mom, leaning left when the pilot says to lean right does not actually make the copter land any sooner!

She encouraged every opportunity we had to go somewhere. A school trip to Washington DC? Go! Study abroad? Do it! Volunteer cross-country or sightsee in New Zealand? Give me two rings when you get there! “Go,” she would say when asked for advice on a trip. “You never know when you’ll have another chance.”

She’s left on her final trip of this life, so I’ll say to my sisters one last time on her behalf, “Beth, Debbie, Tammy, Suzanne: LET’S GO!”

Mom was an amazing mother. Our home was filled with crafts, games, toys, and laughter. She made us dresses for every holiday, often making herself one to match. Many nights she woke us to fit our clothes just right. I don’t think she ever slept.

For our first birthdays, she made us each an elaborate train cake. She saved one car, froze it, and made us eat it on our 21st birthday. It was disgusting. At Halloween she baked cupcakes for the entire neighborhood and made us matching costumes.

Mom was the classroom mother extraordinaire. She threw fabulous holiday parties and dressed to match the event. She volunteered at every Field Day, attended every performance, and made costumes for every play. Mom was always THERE, whether we wanted her to be or not.

When our father was killed, Mom was devastated. But she taught us that strength, determination, and family can get you through any adversity. She never really moved on, but she marched forward for us. And she showed immense strength after the fire in our home, when she worked for months to make it livable again.

Everything she did for us, she did for her grandchildren too. As Gramchi, she was unparalleled.

As adults, we relied on her for advice. She was the first we called with something troubling, confusing, or exciting. We are still going to reach for the phone to talk to her. But our phones will be a lot quieter now. Our mailboxes will be emptier without her cards, coupons, newspaper clippings, and other interesting bits she sent.

Whether she is with us here on Earth or watching us from above she will always be our Mom.

Minutes before slipping into sleep Saturday, Mom asked for the time. “It’s 12:48,” I said. She looked at the clock and sighed before closing her eyes.

Mom always wanted to know the time. She had several watches. Over forty clocks. She took meticulous notes on times, dates, and names, too. A note above her sink began “Happiness Is,” followed by all our names. She re-made the list on August 28, 2014, adding two more grandchildren. She never missed a birthday call or holiday card.

Her hospice window was covered in cards top to bottom. We read them all to her, dates included. A calendar listing our visits hung nearby. She wanted two clocks, one analog, one digital. I asked my sisters why they thought Mom had so many clocks. “She was obsessed with time.” “A sign of an ordered mind.” I think clocks keep us coupled with the earth, measuring how much time has passed and how much is yet to come before we are free of whatever holds us here. What held Mom was equal parts grief and love.

Mom spent her last days wandering through memory. She talked about Italy. Time collapsed, and she was a young woman at a Roman café, flirting with the waiter to procure a souvenir menu. All at once, her parents were seeing her off an adventure, while her husband was arriving home from a long day at work. Her daughters were children again, and she was sewing their Easter dresses.

This winter of record has wound down. Last Sunday, as icicles dripped down onto the driveway and my sister declared 40 degrees a scorcher, we set Mom’s clocks ahead, signaling the start of spring. But before the first crocus could peek into her English garden, before the tiniest two grandchildren could wake to their first Easter, before the muddy smell of the most earth-full season could reach her room, she left for a new, eternal life.

And you know what? She’s still got a watch on her wrist, a clock on the wall, and a train to catch.