Last Saturday, J&I were lucky enough to play one of our favorite board games (and we have a lot of board games … a lot a lot … so categorizing this as one of our favorites is more important than it might otherwise seem) with a lovely couple, A&S. The game is Ticket to Ride. It’s a simple game: using color-coded cards as payment, players build rail routes across the U.S., one segment at a time, connecting cities to cities, states to states. And to a little bit of Canada, too.

So, we’re big fans of A&S, and being that this was their first Ticket to Ride experience, we set up the board so that they could fully appreciate it: right side up. How discombobulating to view the Denver-to-Miami route upside down, as J&I did throughout the game.

I remember reading a few years ago about Dr. Arno Peters and his controversial redrawing of the world. Believing the standard Mercator map unfairly represents European and North American countries as larger than they really are, Peters suggested an alternate that would lessen the size distortion and reduce the map’s inherent bias against third world countries.

Wait a sec… I didn’t read about this. I saw it on The West Wing. Great scene!

Anyways, while playing Ticket to Ride with A&S and having a smashing time doing it, I did start to find comfort in the upside down map. It’s just one visual representation of reality and, if I remember correctly from that West Wing scene, as well as high school geometry, no flat map can ever represent the spherical world with 100% accuracy. So what is “right side up” anyway? As in writing, there’s never a 100% accurate way to represent the stuff of memory. And there’s definitely no right side up.

Last Sunday I spent 12 hours editing, many of those hours in a newish position—reclined on the couch/bed in the office. And since the cats were determined to find a new position themselves, I opened the blind over the left window—something that, because of our building’s architecture, I rarely do—and saw the view out my window from a completely different perspective. These buildings belong somehow to the United Nations complex. I suspect they are hotel/conference centers affiliated with the U.N. though not central. Still, they’re there, every single day, as I am, every single day, and we are not so far away from each other, me and these buildings. 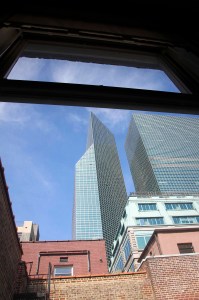 Though I’ve always known, of course, that they’re taller than my apartment building, from this perspective they seem extraordinarily tall. Infinitely tall. Distorted in size, as with the Mercator map, because of the angle of my viewing, the uniform green glass exterior, and the points that seem to be stirring the clouds like cream in coffee.

Despite the upside down perspective on Ticket to Ride, by the way, J won. Gah. He’s so good at that game.